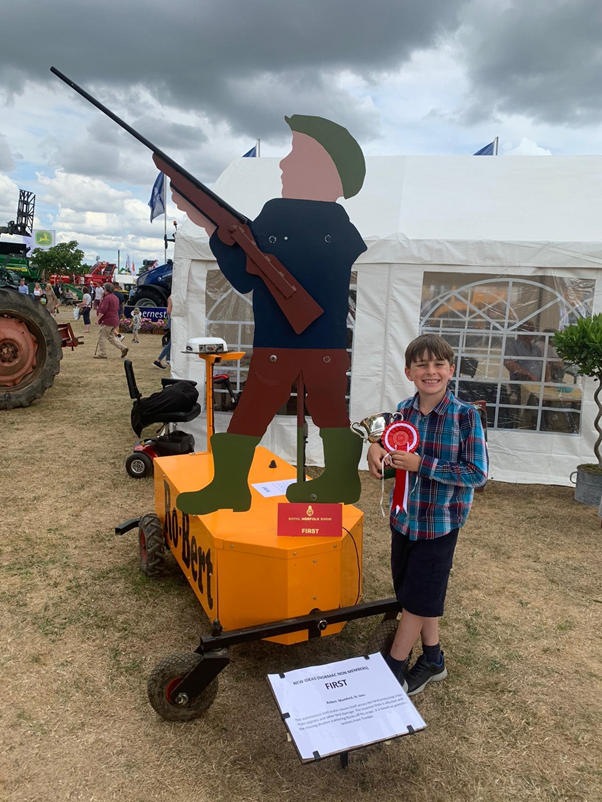 His satellite-guided “Ro-Bert” machine scatters flocks of birds by moving autonomously across fields to pre-programmed positions, triggering the movement of a model boy in a flat cap with a shotgun – based on a photo of himself.

Robert said ‘the idea came from a local frustration at the use of noisy gas cannon bird scarers.  William Mumford, Robert’s father, helped make the idea a reality.  William is of course our business owner as well as a farmer!

The silent robotic bird scarer works by having different waypoints that it is programmed to go to and stop.  It then moved the gun up and down to scare the birds away.

“The idea popped up in the winter. All the gas guns were going off in the village so the Facebook page was going mad with people saying: What’s that noise, why is this going on? It’s scaring the dogs, why can’t you make a silent one?”

Robert’s Mother and Father are very proud of his achievement, long may the innovations continue!

Industry News Share To TwitterShare To FacebookShare To LinkedIn

No comments to show.

We use cookies on our website to give you the most relevant experience by remembering your preferences and repeat visits. By clicking “Accept All”, you consent to the use of ALL the cookies. However, you may visit "Cookie Settings" to provide a controlled consent.
Cookie SettingsAccept All
Manage consent

This website uses cookies to improve your experience while you navigate through the website. Out of these, the cookies that are categorized as necessary are stored on your browser as they are essential for the working of basic functionalities of the website. We also use third-party cookies that help us analyze and understand how you use this website. These cookies will be stored in your browser only with your consent. You also have the option to opt-out of these cookies. But opting out of some of these cookies may affect your browsing experience.
Necessary Always Enabled
Necessary cookies are absolutely essential for the website to function properly. These cookies ensure basic functionalities and security features of the website, anonymously.
Functional
Functional cookies help to perform certain functionalities like sharing the content of the website on social media platforms, collect feedbacks, and other third-party features.
Performance
Performance cookies are used to understand and analyze the key performance indexes of the website which helps in delivering a better user experience for the visitors.
Analytics
Analytical cookies are used to understand how visitors interact with the website. These cookies help provide information on metrics the number of visitors, bounce rate, traffic source, etc.
Advertisement
Advertisement cookies are used to provide visitors with relevant ads and marketing campaigns. These cookies track visitors across websites and collect information to provide customized ads.
Others
Other uncategorized cookies are those that are being analyzed and have not been classified into a category as yet.
SAVE & ACCEPT