We host The Worshipful Company of Engineers, demonstrating the importance of soil in the journey from seed to store - Vantage E & W
Skip to content 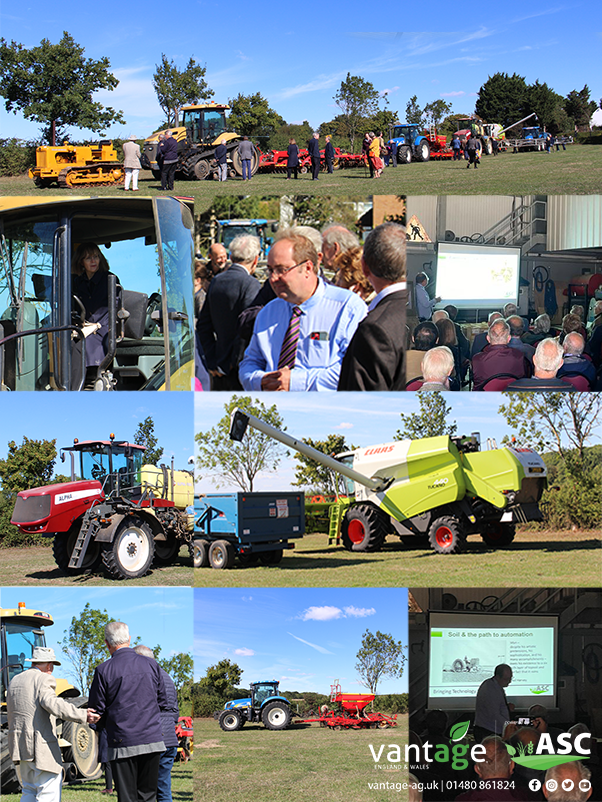 We host The Worshipful Company of Engineers, demonstrating the importance of soil in the journey from seed to store

On a sunny Saturday in Cambridgeshire a coach full of extremely talented and technically minded individuals descended on our companies owner and his farm, ready to engage in conversation around precision farming and its future.

Farming for over 30 years William Mumford has seen significant change in people, practices and the priorities of UK Farmers. One constant that has remained is summarised extremely well by a Mr Paul Harvey; “Man- despite his artistic pretensions, his sophistication, and his many accomplishments – owes his existence to a six inch layer of topsoil and the fact it rains”. This very much set the scene for the next couple of hours of presentation and discussion with those who attended. It has become clear from weather monitoring over the last 10 years that the climate is in fact changing, rainfall has been noticeably less this year, but this is not a new trend and images of soil conditions year on year clearly point this out. However, when it does rain on to poorly managed soil it can result in a quagmire of waterlogged, structurally damaged and un-workable mud, something we hope to improve.

Will presented the cycle of how we have been working the land, from the horse and plough to now where we have 15+ tonne power units pulling heavier and wider implements through the ground. This is something which has been born from a shortage of labour, when the beloved 4.5 tonne Track Marshall was laying tracks throughout Cambridgeshire there could be as many as six of them (each with a driver) working on the equivalent area one machine will work today. With less people available to operate the required hours our equipment has had to get bigger in order to work the same ground with less people, not to mention weather windows getting smaller and less consistent Will explained. The question was raised; “are we going full circle?”

With confidence, experience and a passionate tone, the answer was “yes”. One of the main topics of discussion was the role in which automation will play in UK Agriculture and how it may help. Will presented the visitors with a visual display of his existing equipment from a cultivator through to a harvester, all lined up to greet them using the same wheel marks. This display was to illustrate the size and weight of equipment we have operating through the country on this precious six inch layer of soil referred to by Paul Harvey. Practices such as Controlled Traffic Farming and Variable Rate Application have been used in an effort to look after our soils, but compaction remains one of the biggest issues faced today, an issue instigated by weight. So there is a trade off, a trade off between large capacity equipment and time in which it takes to complete the necessary work, how do we work the same amount of ground with less weight? Automation.

We have seen a number of automated vehicles enter the Agricultural space in recent months, some of them successfully working in Europe and the UK. These vehicles are smaller, lighter in weight and vary in design, but they all have one thing in common: there is no operator. Will explained that removing an operator from the seat increases the capacity for working time, an autonomous vehicle is not subject to fatigue after prolonged hours like a human, they are not phased by warm or cold weather, hunger or social commitments. Not only can these machines work 24 hours (fuel allowing) but they are saving farmers expenses associated with humans including wages, fuel to power air conditioning and holidays.

As the owner of Vantage ASC Will has seen many a UK Farmer embrace technology in order to reduce cost and improve productivity, there is a clear foundation to which this next step in technology could be built from. Common place in the UK are farms which have digital maps, field boundaries and A-B lines used to guide operators and their machines up and down fields. The same principle would be used by autonomous vehicles but with more importance being put on them as there is no operator to intervene should a boundary not be in the correct place. Weighing less, it is suggested that the autonomous vehicle will begin to help our soils recover, no longer will we need to be increasing the depth of our implements to battle compaction. As there is less weight, it may also be possible to work these soils for longer during wet conditions given they put less pressure on the ground.

After a great discussion the visitors exited the workshop based theatre and took a look around the machines outside, all of them fascinated not only by the size of this equipment but also by the amount of applications/ passes required to take a crop from seed to store. At the front of this line up was a Track Marshall referred to earlier in the presentation, behind this stood a CAT Challenger with a Vaderstad topdown cultivator used on the heavy clay soils here. Next in line line was a New Holland and Vaderstad 4m drill shadowed by a Hardi Apachi self propelled sprayer with its 24m wide booms. The sprayer then opened up the way for the final duo in our crop cycle, a Claas Tucano combine and New Holland with grain trailer.

Presenting the equipment in this way really highlights the infrastructure going into the growing of our food, and this could be described as quite a modest line up. So what did our visitors think of their new found information? A number of them were pleasantly surprised by the care and responsibility taken to manage our soil, facts and figures about the rainfall and calories produced by a single holding generated awe during the presentation. These great people came from a wide range of industries, sectors and areas of the UK but all of them had one thing in common: they owed their existence to the top six inches of topsoil.

As part of a 4 day event our guests and WIll departed the farm to continue conversation over lunch before the guests completed tours of facilities in Cambridge and closed their event with informative walks around the city. Everyone at Vantage ASC would like to express our thanks for them taking the time to see us and hope it was a highlight in their annual search to further develop their knowledge and share ideas. We look forward to seeing them and similar groups in the future.

Industry News Share To TwitterShare To FacebookShare To LinkedIn

No comments to show.

We use cookies on our website to give you the most relevant experience by remembering your preferences and repeat visits. By clicking “Accept All”, you consent to the use of ALL the cookies. However, you may visit "Cookie Settings" to provide a controlled consent.
Cookie SettingsAccept All
Manage consent

This website uses cookies to improve your experience while you navigate through the website. Out of these, the cookies that are categorized as necessary are stored on your browser as they are essential for the working of basic functionalities of the website. We also use third-party cookies that help us analyze and understand how you use this website. These cookies will be stored in your browser only with your consent. You also have the option to opt-out of these cookies. But opting out of some of these cookies may affect your browsing experience.
Necessary Always Enabled
Necessary cookies are absolutely essential for the website to function properly. These cookies ensure basic functionalities and security features of the website, anonymously.
Functional
Functional cookies help to perform certain functionalities like sharing the content of the website on social media platforms, collect feedbacks, and other third-party features.
Performance
Performance cookies are used to understand and analyze the key performance indexes of the website which helps in delivering a better user experience for the visitors.
Analytics
Analytical cookies are used to understand how visitors interact with the website. These cookies help provide information on metrics the number of visitors, bounce rate, traffic source, etc.
Advertisement
Advertisement cookies are used to provide visitors with relevant ads and marketing campaigns. These cookies track visitors across websites and collect information to provide customized ads.
Others
Other uncategorized cookies are those that are being analyzed and have not been classified into a category as yet.
SAVE & ACCEPT